The sun glares weak and orange through the ashen skies at noon. By 4 it looks tired. We stand in the little lobby at Joe Goode Annex waiting for the house manager to let us in; when she pulls the door-curtain back, the tall western-facing windows glow brighter by contrast with the gleaming black floor. There are four bodies scattered in huddled lumps that remind me of dropped socks, although these, unlike laundry, are moving…. A red line of chairs frames the three unwindowed walls. 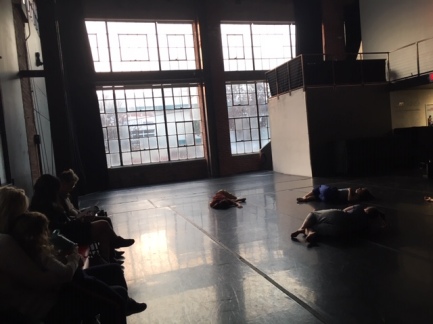 Many audience members stride into the space and choose seats without visible self-consciousness. Maybe they’re schooled in contemporary performance, and aren’t easily perturbed by the lack of clear boundaries; maybe they’re just focused on getting to the bathroom. Either way, we all share the stage for an extended moment. Without a light cue, it takes quite a while, maybe ten or 15 minutes, for the house to settle down.

Was there sound when we entered? I think so, and it has no propulsive energy or melodic structure to mark time. At some point, I realize I recognize only two people there, choreographer Gerald Cassell and tattoo artist Idexa Stern. The red chairs are full and a house manager comes to offer floor mats. I stand; several children choose to sprawl. After what seems like 10 minutes, the dancers are moving more now, not faster really but more frequently. Eventually, it becomes clear that the one closest to the windows is migrating toward the audience, while the other three, already closer to us, are migrating toward one another. I think about knotted clumps of worms. I wonder about their timing, and I fancy I can identify a leader from whom the other three are taking some cues. I notice that two of the dancers are now touching—spooning in slow motion– while a third is several feet away and the fourth is still separated from them by yards. From 4 individual sock-piles, they’ve morphed imperceptibly into a dyad with two asymmetrical outliers. At the end of the evening—after much dancey-dancing– they huddle under the windowsill, where the streetlights can’t touch them and their shapes recede into the shadow, four individual bodies in a line that then stand to come toward us and take their bows.

I’ve come to this performance for three reasons. One is that dusk has always been my favorite time of day. The other two are Arletta Anderson and Karla Quintero, who are dancing tonight; both are lucid, eloquent, and intelligent movers, always worth watching. Anderson is quick and fierce, with something urgent in her concentration. Quintero is languorous and elegant and sophisticated. More than once during the performance I find myself imagining that Arletta is setting the pace, but when I seek confirmation by focusing my attention, whatever I thought I saw has dissolved. (Phoenicia Pettyjohn and Aura Fischbeck, the choreographer, are the other two dancers. While I’ve known who they are for years, I don’t know that I’ve ever watched either of them perform before.)

How do you track the fade to grey? When does afternoon give way to evening? What is the difference between twilight and nightfall? These are questions that occupied and enriched the seasons of my rural childhood, quiet in the backyard near my brother; I’m well prepared to pass time with people, being near them as darkness gathers, sharing the end of the day in silence. Maybe that remembered companionability is part of why I am most attracted to the segments of the dance when the edges of the stage dissolved. At one point, while the other dancers are leaping about, Karla lies down on her side with her back almost brushing the toes of the people sitting two chairs to my left. In front of me on a floor mat, her back brushing my toes is a child (about 8) whose body begins to vibrate with the extra energy of Karla’s proximity. Careful not to be in the way, she pulls herself into her center the way a snail pulls in its eyestalks; and taking up a smaller space makes her dense so that I can feel her intensified presence as a charge in the air. I am half-hoping and half-fearful that this subtle disruption of the boundaries between dancer and audience, stage and house, will be developed. Will the child by my feet be able to hold even more energy? That’s when I realize I’m really not finding much meaning in the larger composition, and without formal clarity or choreographic experimentation to engage me, I am reaching for relational motivation. It isn’t isolated and framed and highlighted and developed the way I’d like it best, but it’s there. At another point Arletta mirrors Karla’s placement, curling up on the floor across from me. The audience members behind her—both women– simultaneously swing their closed knees to opposite sides, opening a V between them as though they’d rehearsed becoming a frame. Here as in our entrance into the space it seems as though we are about to be solicited to understand ourselves as in the dance, with the dancers. It’s as though the point of dusk is to be in it together.

These moments are fragmentary, but even as shards they are beautiful and not always safe. Twice Arletta performs a series of short runs, full tilt on a straight line directly toward the end of a row of seats so that her feet have to stutter under her, breaking her momentum just in time to avoid a collision; and again I find myself eager and interested. I hope she is looking directly at the person she is running toward. I hope she slips and careens into them. I do eventually identify a couple of unmistakable cues the dancers use to shift into new sequences, but I no longer concern myself with them, because it seems clear that the relationships among them will remain abstract and disconnected as long as they are on their feet. When they are on the ground, something else happens. Toward the end the four women curl around one another in a loose and mobile geometry, limbs and heads resolving into momentary comfort before one slight adjustment sets off a chain of responses in all the bodies.

The dancers’ mobile spooning reminds me powerfully of the way infant mammals climb on their mothers’ bodies, of the comfortable accommodations of middle-aged lovers, of the presumption of sexual innocence in contact improvisation. What would have happened if the dancers had inserted themselves into the body of the audience with the same calm and skillful boldness? What might have happened if the lights had not come up as the sun went down and the movement gained force? Could touch and sound have taken over from vision as a way to know who was where in the room, doing what with whom? I don’t mean to imply that Fischbeck ought to have staged an orgy, but rather to underscore the interesting moments of discomfort she created when the boundaries weren’t held stable. I’d have liked to have spent more time there, then, hovering in the moments when it isn’t clear whether it’s day or night