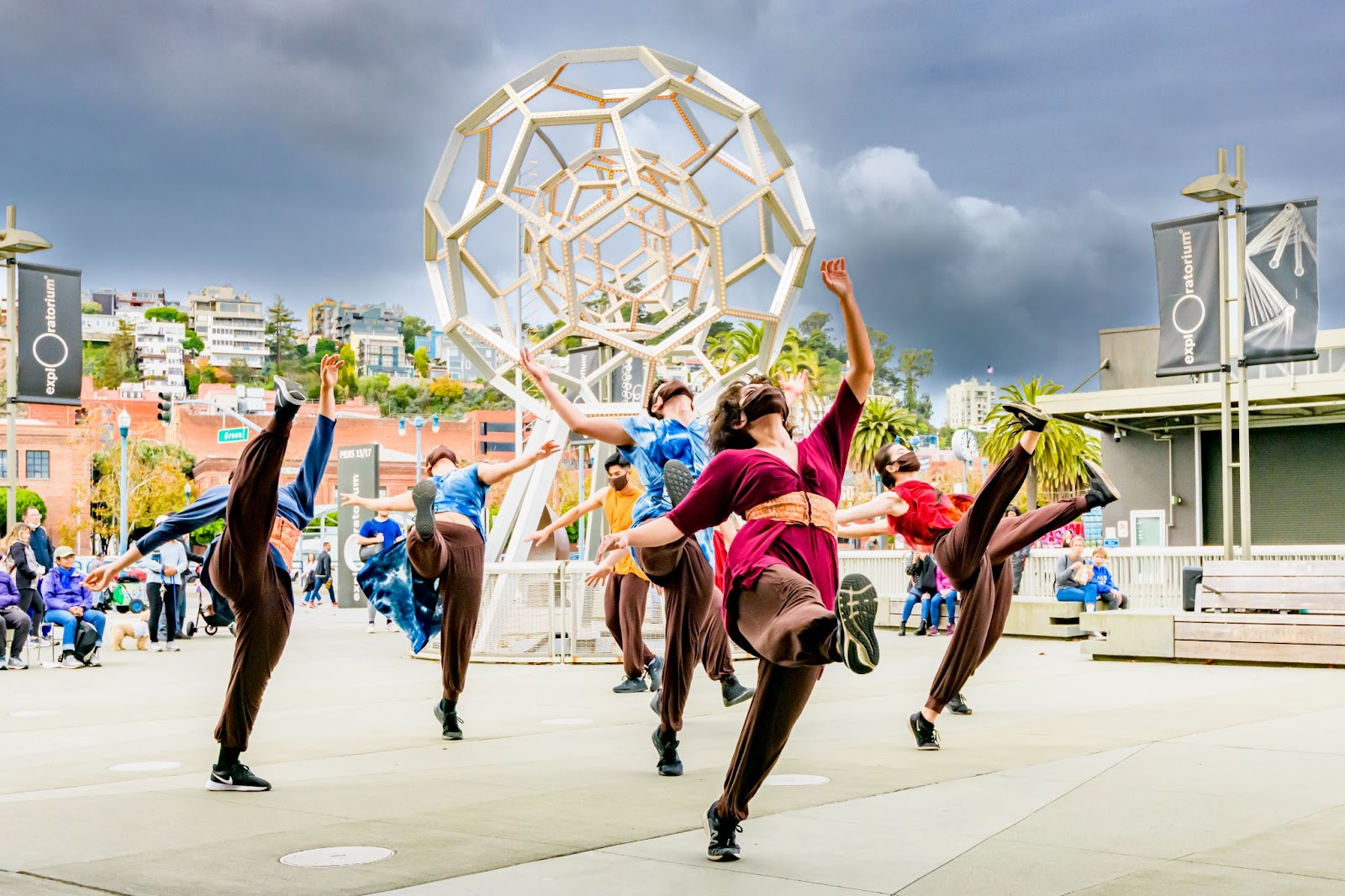 The Embarcadaro on San Francisco’s waterfront is home to many restaurants, shops, and attractions, including the Exploratorium Museum of Science, Art, and Humanities. A cement plaza outside the Exploratorium overlooks the water and contains a 25-foot illuminated sculpture of a geometric sphere. This sculpture, called the Buckyball, was what drew Alyssa Mitchel to create her site-specific dance piece “Here. Now.” at the Exploratorium.

When I arrived at the plaza on November 7th there were many families and tourists, enjoying the sun and seemed oblivious that a performance was about to occur. People started to notice that something was afoot as speakers and microphones were set up and tested. Chairs began to form barriers on three sides of the plaza, and I quickly chose a seat that would put me in the center of the action.

The dancers seemingly appeared out of thin air and walked to their places from behind my seat and began to warm up. As they stilled in their starting positions and the music began, all the energy swirling in the plaza became focused on the dance.

The music used in Here. Now. was staccato and rhythmic at times, and soft and fluid at others. The sounds were layered and complex, but the simplicity of each deep tone resonated in my body. These natural sounds in the music also helped set the piece in its surroundings. The seagulls calling to each other, the honking of traffic, it all blended together.

The movement itself complemented and contrasted the music throughout the piece. Sometimes matching the sharper notes with spritely, playful energy, and other times creating long drawn out shapes following the deeper tones in the music. Stillness was placed before or after phrases of quicker steps. Long leg extensions and balances followed a duet with a series of lifts. The movement styles ranged from contemporary and partnering to stepping and breaking. No matter the movement quality, there was a rhythm to the piece that made everything flow together and blend one moment into the next.

The choreography also highlighted connection, to each other, to our surroundings, and to ourselves, and this could be felt between the dancers during the performance. The use of breath was emphasized throughout the piece as a way to center oneself, and it was also what the dancers used to match up their movements. As an audience member, I was made conscious of the importance of my own breath as I witnessed the dancers use it to communicate and help themselves through such physical choreography.

When Alyssa Mitchel was creating Here. Now., she was largely inspired by mindfulness meditation and centering oneself with breath. Each section is titled after and focused on some aspect of Buddhist practice and mindfulness exercises; Loving Kindness, Tonglen, Noting, Four Noble Truths, Eightfold Path, and Body Scan. As an audience member, I was taken on a journey through each of these themes and was able to think about how I could incorporate these ideas into my own life. As a dancer myself, I am intrigued by the idea of exploring a concept like mindfulness through movement. Embodying such internal and neurological processes and what they feel like in a physical way, can change our relationship with them and see them from a new perspective.

The Buckyball and surrounding plaza was a great place for the dance to exist. The connective, living organism feeling of the piece is mirrored in the sculpture’s architecture. The rootedness and webbing of the Buckyball are reflective of the dancer’s energy, togetherness, and execution of the choreography. Just as the music fit in with the surrounding environment, the dancers did too. 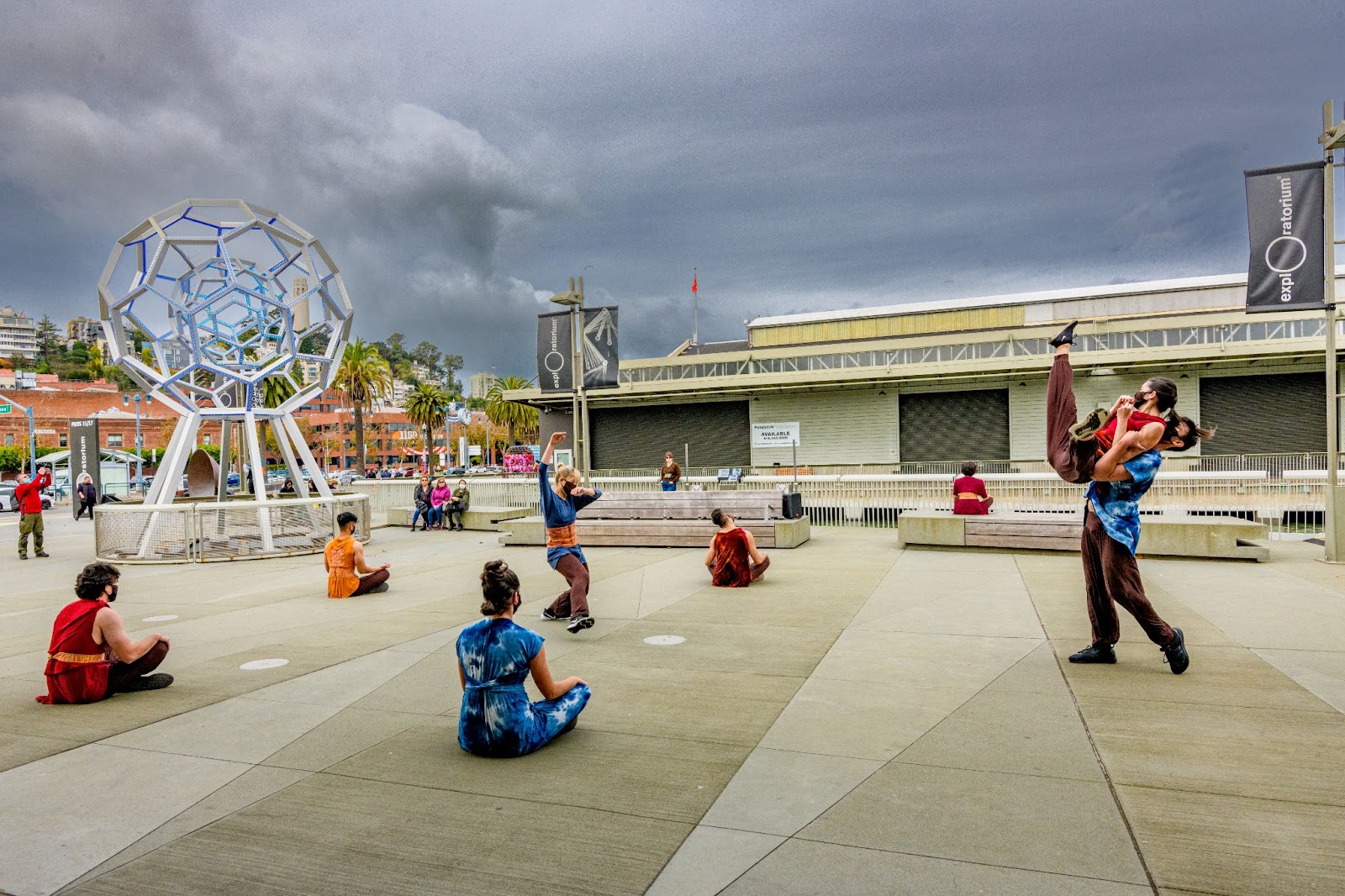