A week after seeing Hope Mohr’s newest piece, extreme lyric I, I sit down to write a response and realize I am late to the game; David E. Moreno on Culture Vulture and Dasha Bulatova on Repeat Performances have already published reviews. I admit to reading them along with Marie Tollon’s interview with Mohr. Even so, I am still sorting through the hour-long piece. Still sifting through its fragments of text, movement, and sound.

A week later, what remains? What do I remember? I remember walking into the theater without looking at the program. The performance was already in progress, the audience sitting in a square on the stage. Four dancers covered in plastic moved behind a mostly transparent curtained square. Projected on the curtain’s walls, Sappho’s fragments (in English and Greek) textualized the performance space – 31, 94, 130, 147.

My notes are fragments; some are illegible while others remain mysteries. 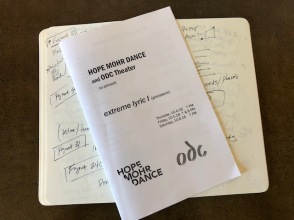 I recall the sounds of bodies moving under lightweight plastic that gave the impression of sculptures while the voices and movement of Mohr and Crandall referenced a Greek chorus. Words passed and passing between the dancers and speakers. At one point, Crandall and Mohr laid down on their sides in the middle of the square and said we need “a different kind of protest where we lie down and moan.” They made declarations: “Sappho’s body is leaking,” “Sappho is obsessed,” and “Sappho is just out of reach.” The soundscape composed by Theodore J. H. Hulsker amplifies the space, creating a moody and muddy atmosphere contributing to a world where bodies are other-worldly but also sensual, almost siren-like, beckoning and naming their “I”s not as identifiers but as possibilities.

I don’t recall specific movements, but recall conversations in the lobby afterward that the dancing was, as always, precise, committed, and strong. I was glad when the curtains dropped and the dancers emerged from their plastic shrouds, passing into a more physical space.

The longer it takes to write this, the harder it is to collect a whole picture. But I don’t think that matters too much. What lingers is a sense that even fragments have something to say even if that something is fleeting or a wondering. For me, I might wander to a bookstore for Anne Carson’s book on Sappho. Or maybe I’ll read the one on my shelf about Eros. This is how extreme lyric I will linger for me; in the possibility of words and the mystery of fragments.