It’s been a while.

After some time away, I’m back to regular programming.  I decided to kick off my return by watching Katie Faulkner’s newest piece in collaboration with Cedric Kiefer (of Berlin-based onformative).  Honestly, I’m not sure what to call the piece as the documentation provided by Dolby on the internet and onsite referred to the work by three different names: Kinesthetics, Collide, and Motion Studies.  I’m still not sure what to make of this terministic stickiness. 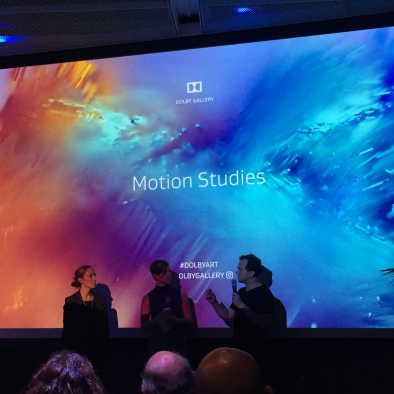 The evening began with a discussion between Faulkner and Kiefer moderated by Julie Phelps of CounterPulse.  I learned that Kiefer generated the visual display that “performed” on the light ribbon screen by analyzing dance archives, collecting data from them, and then visualizing movements from the data.  This same data were used to create the sound score that accompanied the visual.  Faulkner then choreographed a “response” to the visualized data.  Phelps called this “closing the loop“ (dance – data – sound – dance).  Faulkner’s two dancers moved alongside and sometimes beneath the ribbon screen in under 10 minutes.  When asked about the process for creating the work, Faulkner stated that she started with improvised dancing that responded to or was inspired by the dynamics of the visual created by Kiefer.  What struck me the most was how deeply human and humanizing the movement felt.  I’m not sure if this “closed the loop.” But I am sure that Faulkner’s choreography not only brought moving bodies into an otherwise hyper-technologized space but also human experience and perspective.  There was no story or message, but there were two bodies reminding me that dance doesn’t always need a message for it to matter.