I was invited by Alyssa Mitchel to write a response to Pilot 70 – Merging and happy for the opportunity. I’ve written responses to Pilot 65 and 67 programs and generally found them to be fun evenings of dance making. The ODC Pilot Program provides a performance venue and framework for emerging artists and is supporting its 70th cohort. Each choreographer is mentored by a professional choreographer and ODC staff in their artistic work, production, and promotion. The selected choreographers self-produce and promote their work collectively, which is not an easy task.

Defining Intelligence by Alyssa Mitchel explored the meaning and nature of intelligence by incorporating video interviews with students and teachers. The inclusion of school desks, rulers, and other classroom references highlighted that institutions of learning still underpin how (and where) we cultivate intelligence. This piece had a lot going on, and it seemed to move fast. I wasn’t sure the videos were even needed as the choreographic movements clearly worked through some of the questions we have about the relationship between intelligence and learning. The end of the dance aptly captured the idea that intelligence is an ongoing process and place of wonder and perhaps a kind of play.

multiple ways to feel invincible by Charlotte Carmichael, a solo performed by Rachel Geller, set a different tone following Defining Intelligence. It was slower and almost melancholic. The music, “Picture your favorite place” by Neterfriends, gave the dance a spacious quality that was amplified by deep plies and large forth positions – as if Geller was gearing up or waiting for something. Maybe she was trying to figure out where to go. Maybe she was gathering strength for some feat. There were glimmers of invincibility especially at the end when Geller’s expression broke into a smile, suggesting that she had figured something out that the rest of us hadn’t. In this way, invincibility might have something to do with persistence and resilience. 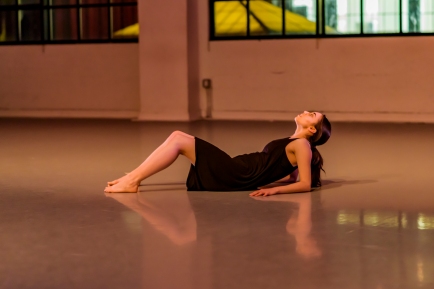 Fuerza by Marlene Garcia offered a dark landscape. The trio of dancers moved in and out of synchronicity. They started the dance together, in a small circle facing inward. I was drawn to this quality the most.  The dancers moved seamlessly between individual and collective moments. The repeated twitching movement suggested an unease or distortion that made the darkened aesthetic even more so. Fuerza is Spanish for force and I wasn’t quite sure how (or if) Garcia was speaking to or with this concept. I couldn’t quite make out the words of “oh ahh Hum” by Jane Winter (designed by Jonathan Crawford), but thought I heard the word “home.” I kept trying to figure out the connection between it and the dancing. The piece ended as it began with the dancers in a tight circle and instead of facing inward, they faced outward as if they gained a new perspective or way of seeing.

Reminisce by Nadhi Thekkek, was part of a larger work, Broken Seeds Still Grow, a mixed media dance production. Thekkek notes: “This work is inspired by witness statements describing the events before, during and after the 1947 Partition of British India.” I was inspired by the possibility of a dance actively engaging with a complex (and troubling) historical moment and its impact on people. The aesthetic and movement vocabulary was fitting and embodied the multifarious drama, particularly in gazes passed between the dancers. The end, focused on the question of how to forgive hate, seemed particularly relevant to the current political climate. Reminisce did feel like a fragment of something larger, but it felt committed and made me curious about the whole work and how one uses dance to deal with the suffering of the past.

Residue by Molly Matutat, was another trio of 3 dancers that started with one dancer in a spotlight center stage that eventually opened up to the full stage with all dancers sharing the space. This was another dark landscape – costumes, lighting, and mood. The crackling-static like sound amplified an other-worldly tone. The choreography included exhausting repetitive movement; the dancers at times ended up on the floor. They never wavered energetically and the pace of the dancing was persistent. I kept wondering what the dancers were searching for, what did they want or need? There wasn’t much resolution at the end, but maybe that was part of the dance’s message. What is left behind? How can we make sense of what we can’t quite grasp? Such questions resonate with 21st Century living.

Daybreak by Tanya Chianese, was the last piece on the program and brought light (literally and figuratively) to the end of the evening. Inspired by the rising sun, Daybreak offered a vibrant dance filled with chorus-like movement and breathing. The seven dancers spent most of their time dancing together, repeating choreography and gestures that at times seemed a little frantic and at others more grounded. While there was a lovely duet it was the collective movements that really stood out to me. And I kept wanting the dancers to slow down so I could focus on the energy between their movements and how they breathed through them. Even so, the light was palpable and the communal aspect of the dance resonated. This piece was well placed on the program given the darker shades of content in the previous pieces by Matautat, Thekkek, and Garcia.

“Merging,” the title for Pilot 70, is a verb that means to immerse, to plunge, to be absorbed and disappear, to combine, to be amalgamated (from the Oxford English Dictionary). The six works (all female choreographers by the way) did not directly engage with these definitions of merging, but they did explore concepts, experiences, and voices in ways that suggest a kind of bringing together. Whether it was a collective questioning about intelligence, hate, or dreams or repeating of shared movement, the dances by Mitchel, Charmichael, Garcia, Thekkek, Matutat, and Chianese were engaged with their content and danced with commitment. I went home glad to have seen six women choreographers and hopeful for the future of dance in the Bay Area.