Installment #1 – A Conversation with Julian Carter

Hope Mohr Dance’s Bridge Project brought Netta Yerushalmy’s Paramodernities to San Francisco. Yerushalmy describes this work as a “meditation on modernism.” These dance experiments are generated through “systematically deconstructing landmark modern dance choreographies” that are “performed alongside contributions by scholars from different fields in the humanities, who situate these iconic works within the larger project of modernity.” Paramodernities explores foundational tenets of modern discourse – such as sovereignty, race, feminism, and nihilism – and includes public discussions as integral parts of each installment.

I was lucky to watch this dance alongside Julian Carter, who graciously accepted an invitation to have a “diablog post” with me. Because we have a lot to say about Paramodernities, this will be a series of 3 installments on each of the three dance experiments.

“Paramodernities #1: The Work of Dance in the Age of Sacred” A Response to Vaslav Nijinsky’s The Rite of Spring (1913)

J: “Paramodernities #1” opened with a scenario you might find in any number of contemporary art spaces: a youngish man, sitting at a white AV table slightly to one side of a large white screen a few feet away. Over the speakers, we heard him say “I am sitting on a stage operating a cassette tape recorder. These are my words, but this is not my voice.” Then he stopped the tape, rewound it, and pushed play again–four times.

This repetition points to nonspontaneity and repetition are and nonlinear temporality as core themes of this work. When Netta Yerushalmy entered she was almost unobtrusive, energetically coiled into herself, hopping and shuffling in highly deliberate but uncommunicative patterns: a huge stomping circle, a triplet of small vertical jumps, a sideways scuttle with the head tilted to one side and framed by the forearms. After she’d been dancing for a minute the recorded voice told us “Netta will dance movements she did not invent.” She was moving more or less in place, parallel with the theorist-sound guy-person, between the table and the screen; here she repeated a short movement sequence while he described her compositional process, in which she extracts vocabulary from dances and reassembles its elements. Something about this sequence seemed like a microcosm of the piece. Yerushalmy kept returning to her in-between place – neither authentic nor innovative, neither organic nor technologically avant-garde, neither reverent nor skeptical about the past. Right from the beginning, Netta enacted a version of modernity that simultaneously mobilizes and questions many of its core premises and assumptions. 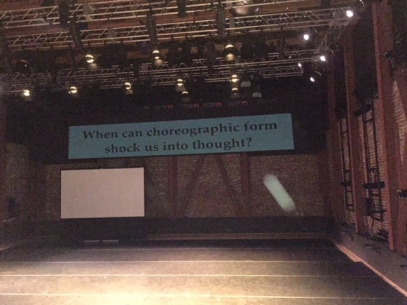 Some such distancing may inhere in the performance of vintage choreography. These movements (Le Sacre du Printemps, or The Rite of Spring) were composed 105 years ago, and they manifest a relation to the modern that isn’t part of any living dancer’s active cultural repertoire. But where reconstructed dances typically devote themselves to accuracy, this one is more interested in its non-approximate identical intimacy with remobilization of its source material. While Netta carved herself into shapes like those Nijinsky used to make, the projected images of Descartes with Queen Christina gave way to engravings of Leviathan and we were treated to a lecture on the overlapping history of ballet and the modern nation-state. Was the scholarly performance part of the mimicry of the modern, where mimicry is understood as repetition-with-a-difference? If so, I could have used a little more weight on the difference side. Nijinsky’s transformation of ballet in Sacre shows us that the geometry of rationalized space can be radically reimagined, and all dancers know that space can’t be separated from time; so why leave the smooth path of Western political and intellectual history uninterrogated? I was disappointed that the textual aspects of the performance treated the linear sequence of European political and intellectual history as immune to creative recombination; I’m ready for some formal innovation there. Given the rigorous examination of multiple temporalities in the rest of the performance, it seemed sad to ask the past to keep on bearing the sober burden of the Real.

One additional observation before I hand this over to you: keeping the house lights up the whole time was an interesting choice. I wonder whether that’s part of why we didn’t cuddle up the way we usually do while we watch dance together? There’s something about sitting in the dark that makes such intimacy seem easier. With the house lights up, I’m more alert in the work of audiencing and less likely to retreat into dreaminess or to let myself drift here and there. My boyfriend said it made him feel like he was with the performance more than at the performance.

M: The lights for me were also an interesting choice – as if we were looked at as much as we were looking at the performers or as if we were in a lecture hall instead of a theater. It made sense given Yerushalmy’s framing of these pieces as “dance experiments.” They might not “belong” in a darkened theater. During the talk-back, Yerushalmy acknowledged using Joffrey Ballet’s reconstruction of Rite of Spring to develop her movement vocabulary. She seemed a little shy about this admission; I wonder why. Is it because there is no “true” Rite of Spring to deconstruct and rework? Even the Joffrey Ballet version, which was impressively researched, involved speculation and estimation.

To me, “Paramodernities #1” seemed to reflect back to us, show us, that history (dance or otherwise) is a practice of thinking about where we are. The use of an old slide projector and cassette player was smart — it played with the possibility that the past is not fully past and that the old can be made anew. I was struck by the repeating nature of Yerushalmy’s posture. The carriage of her body was rigid; it seemed hard for her to bend in certain ways. Her arms flexed sharply at the elbows toward her abdomen and her legs bent inward, making her knees knock and her feet pigeon-toed. This posture created a restricted and strained quality in her movement; how much could she actually move? While she danced around the space, sometimes flat-footed and other times in a turned-in relevé, she kept repeating the same vocabulary in different directions. After a while the phrases began to suggest (even embody) Stravinsky’s music. It was as though Yerushalmy’s movements were serving as a kind of score. The history of Nijinsky’s dance is unavoidably tied to the history of the score so it’s interesting that “Paramodernities #1” didn’t need the music. I found the lecture that overlapped with Yerushalmy’s dancing to be a little fragmented. Were some of those historical and conceptual threads picked up later in Thomas DeFrantz’s lecture, or in the speaker/writers that Yerushalmy incorporated into “Paramodernities #4″ somehow? Does it matter?