I couldn’t attend Jess Curtis/Gravity’s (in) Visible at CounterPulse (Oct 3-6 & Oct 10-13) so I asked Megan Nicely to write a response. I Posed three questions and Nicely offered three compelling answers.

Did you feel that the dance was able to engage you differently without being able to see it? In other words, how did the dance “dislcoate[d] vision from the center of your experience?

I’ve attended Jess Curtis/Gravity’s work for many years. I’m engaged by the questions Jess asks and always curious how he will address them. In general, I would say that he begins with the body and looks for ways to expand or test different thresholds of experience and perception. He often works in collaboration with performers and other artists, and more recently philosophers. Reflecting on the performances I have seen, I observe a gradual shift from a focus on the performer’s body to increasingly include those of audience members as well. The recent piece (in)Visible is designed with this perspective in mind. The promotional materials ask: “How do you experience a performance? By seeing it? What if that’s not possible?”

The night I attended I was part of a much more diversely abled audience (at least based on albeit limited visual markers), which already speaks to some of the politics of Jess’s work. Audio Description and ASL interpretation were made available, and the visual experience I did have as a seeing person was enjoyable–six dancers’ skillful navigation of the circular and narrow spaces through the scattering of audience chairs, which heightened my kinesthetic sense. Throughout the evening, I appreciated having time to attend to my own audience body. I was not asked to participate in the ways some immersive experiences demand, nor was I simply watching a spectacle. By addressing what Jacques Rancière calls the “distribution of the sensible,” (in)Visible speaks to the politics of dance aesthetics and challenges audiences to find meaning in new ways.

After experiencing the work, however, I found myself grappling less with other sensory modalities than with the space left by the demotion of vision, and what came in to fill its place. I find that the above promotional questions can be taken in several ways: first, they ask how artists might expand the art form to include multiple access points and varieties of sensory awareness, but they also ask what we can learn about vision’s role in dance by destabilizing its hierarchy. Because this work was designed less to give a seeing person a new experience than to include a non-seeing audience, I did find myself constructing meaning in new ways. In this particular piece, speaking stepped into vision’s location, accompanied by some less dominant touch as air, a prop, or a performer made subtle contact. This dominance of the voice stood out to me, not because I necessarily consider dance to be “nonverbal,” but because language, like vision, is a tool of power that can make explicit or invisible certain experiences. This choice interested me.

What did you take away from the dance? What questions linger?

First and foremost, as an audience member, I felt well taken care of. Prior to entering the theater we were each given a glow stick and were instructed that if at any time we felt uncomfortable or needed to leave the performance, we could simply break it, signaling a desire to exit. We were also greeted by performers as we looked for seating in the groups of chairs arranged on and around the periphery of the stage, and were reminded several times during the show that if we did not want to be touched by a performer, even if we had chosen to sit in an interactive chair, we could opt-out. These tactics set the tone for performance in the age of consent, where crossing conventional theatrical boundaries in order to shock audiences out of a “false reality” were instead approached with caution, suggesting not tamed performance so much as a new training of how to bring an audience body into a performance experience. Maybe it’s time to update Antonin Artaud’s Theatre of Cruelty for today’s age?

What lingered after the performance was that these consensual audience interactions did not lend agency to the audience, except in refusal by saying “no.” Those in the participatory seats were manipulated like puppets or props, with often humorous commentary (“I am taking off the subject’s shoes,” “I am looking for the subject’s phone”). The specifics of these interactions were articulated verbally just before they happened, a skillful consent strategy. However, they were not questions but statements (although I did experience a whispered personal exchange next to me between a performer and audience member as the performer attempted a more ambitious move–standing on the audience member’s thighs–whispering as they ascended, “ok?”) I was awakened to the vast range of performance strategies for connecting with audiences without merely eliminating boundaries altogether. Here, the lines between the performance of consent and actual consent were blurred–as they often are in “real life.”

Does the dance resonate with any social/political issues out there right now?

The piece left me questioning what seems to be a problematic issue in our human social world: ambiguity. Not only are there grey areas of meaning and interpretation, but even when seemingly “factual” or descriptive, statements and actions do not always line up. Anyone who has stepped briefly into performance theory knows that the performative–when “saying something is doing something”–can either be truthful or in J. L. Austin’s words “infelicitous.” It is only truthful when socially agreed upon and repeated so that others understand it as such. While not performative per se, (in)Visible was a beautiful example of truthful alignment. Even when phrases themselves were more abstract or interpretive rather than descriptive–i.e., “I am not ignoring the subject” while dancing close by–there was little question that what was said and what was done were in agreement.

The alignment or word and deed is increasingly rare and often not the case. Different interpretations of words and actions populate today’s headlines. Words and movements can lie, as well as tell truths, depending on context, and with the rapid changes to these contexts, it is no wonder we don’t quite trust either words or actions very much at the moment. Will removing vision–and speaking for that matter–lead to other kinds of centralized experiences, both in performance and outside of it? While a welcomed change, do proceed with awareness. Lest you surrender all visual capacities, the digital audience survey, which earned one a free drink, did not allow one to “opt-out” of any of the questions. I guess that is the price for diverting attention to other sensorial desires.

First a little thank you note:

Thank you for moving to a point to tenderness and offering a moment to reflect on how we come to love (each other). Thank you for offering emotional exchanges about bodies, looking, and feeling. Thank you for trying to speak differently about how seeing and not seeing difference matters. 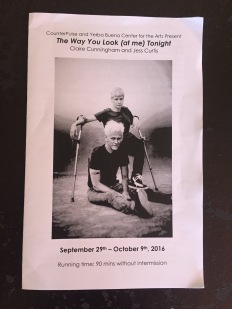 The program notes frame the piece as a “social sculpture – a sensory journey for two performers and audience…[that asks] important questions about our habits and practices of perceiving each other and the world.” For the most part, The Way You Look (at me) Tonight stays within this frame. Cunningham and Curtis move their bodies and words to confront the sometimes uncomfortable spaces between the perceptions of others and ourselves. They navigate and narrate their own experiences with disability, age, and sexuality, reminding the audience that how we look at others has consequences and that as Diana Taylor says in her book, Performance, looking can be fraught, even risky (79).

Cunningham dances with remarkable ease (and strength); her crutches are extensions of her body that move with precision and grace. At one point Curtis lies on the floor while Cunningham walks on him with the full weight of her body. During this sequence, Alva Noë’s pre-recorded voice (the philosopher consultant) voice thinks out loud about what he is seeing. I found this to be an unnecessary interruption. Honestly, I don’t really care what Noë saw or what he thought about what he saw, and felt it contradictory to the participatory frame of the piece.

Perception is not just about the eyes and The Way You Look (at me) Tonight examines that by showing us different ways of looking and sensing each other. I think this dance has the potential for genuine learning. I even modified their “game” of peripheral fluctuation, where you keep people in your peripheral vision without directly looking at them, for one of my classes. It really got us talking about how much we are able to see, and how often we chose to not see. I can envision how this dance could be taught alongside texts that aim to explore cultural difference, rhetorical listening, and the politics of perception.

90 minutes without an intermission is a lot to ask, but I was still happy to go home thinking about love.

I saw four different dances, and here are my very gut reactions to each one.

The best I’ve seen of them and some segments were quite interesting.  I’ll go see the larger work, but I am still not sold on them choreographically or as dancers.  Why do they only choreograph for themselves?  As N said, “They seem a little too self-congratulatory.”

I’m just going to say it: I was kind of offended (and shocked that N had the same response).  There as a part of the dance that crossed a line.  I’m sure I opened my mouth in surprise, or scrunched up my nose – did I really just see that?  It’s hard to describe, but the movement seemed to be mocking to a degree of maybe not being aware of its potential offensiveness.  Didn’t anyone tell them?  Am I being too sensitive? Overall, I liked their aesthetic and the first two sections were fantastic.  I’m a little confused.

K: “that was the longest 30 minutes of my life”

N: “that was so disappointing”

Probably the most interesting part was when one of them quoted Heidegger.  The rest was an utter bore.

The Dance that Documents Itself, Jess Curtis/Gravity

I don’t mind naked bodies on stage, but I need it to mean something.  The rest did seem to get at larger issues of digital documentation, subjectivity, etc.  I appreciated the moment when Jess stepped out to address the current state of San Francisco’s economy and housing crisis.  He recognized that some things just can’t be “danced” and need speech; dance isn’t always the best way to communicate.  I was a little surprised that Christy Bollingbroke mentioned that this piece is a “set-up” for the ODC Theater programming for the next season.  I am curious to see how that plays out and what it means.